The most popular version of the original Medieval hymn, “Pange lingua,”  was written by Saint Thomas Aquinas in the 13th century as a means to celebrate the “Feast of Corpus Christi.” The first phrase roughly translates from Latin into “Sing, my tongue, the Savior’s glory.” The title of this piece takes the first word of every two phrases (“pange,” “sanguinisque,” and “fructus”) to form: Sing, Noble Blood.

The most prominent characteristic of “Pange lingua” is the arch of the melodic line – by the first two phrases, the lowest note and the highest note are reached. The remaining phrases react to the beginning rippling effect by gradually slowing down (never reaching the highest note again and always leading downward back to the initial note “E”).

When analyzing further, seven prominent intervals can be seen between the entirety of this 28-note chant: unison, minor 2nd, Major 2nd, minor 3rd, Major 3rd, Perfect 4th, and Perfect 5th. After counting the instances of each interval and assigning a chromatic rhythm series along the interval progression, a clear rhythmic motif becomes clear: the dotted 8th followed by the 16th note. This rhythmic idea can be seen emphasized on the first leap of a perfect fourth in the trumpet part. 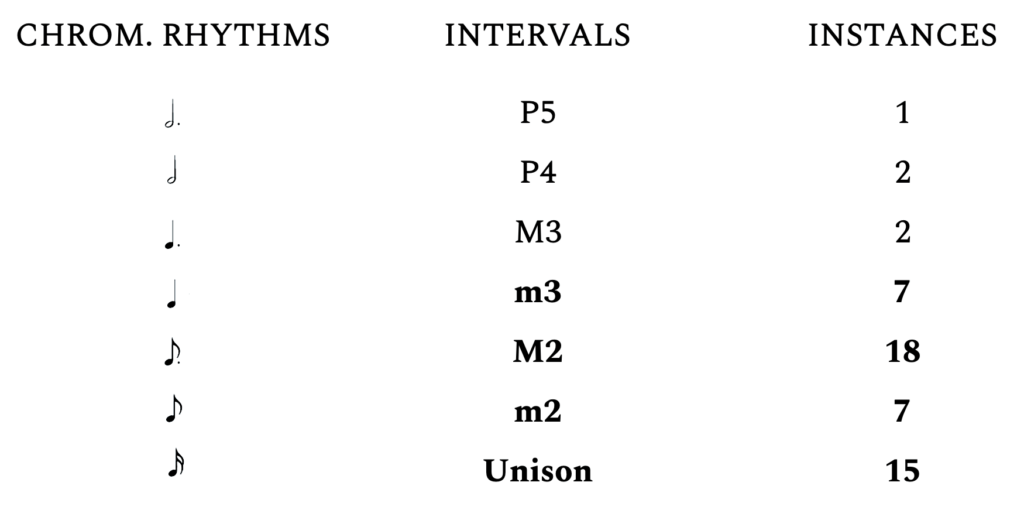 The construction of Sing, Noble Blood is heavily influenced by the construction of the original chant. The order of intervals presented in both the original chant and this brass trio occur in a specific order: minor 2nd, Major 2nd, Perfect 4th, minor 3rd, Major 3rd, Perfect 5th. This expansion of melodic intervals in the chant is contrasted by the emphasized 2nds in the final phrase – another reason for the many rise and falls in Sing, Noble Blood.

The iconic sound and sway of chant music is respected in this composition; of course, harmonically it is far more explorative in nature (though still constructed of intervals mentioned above). Brass instruments were chosen to relate most closely to the timbre and character of voices. Many ritardandos/accelerandos, fermatas, tempo markings, and irregular meters/meter changes were used to allow for a near speech-like freedom that chant expresses. Throughout the piece, a playful reverence evolves into chaotic entanglement only to gradually settle down again, hinting at cyclical chant.

Listed to all contemporary media.